Does Anyone Still Hand-Write The Bar Exam? 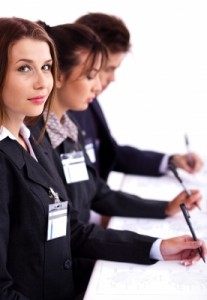 Who remembers using a typewriter? Well, I do! When I was growing up, having a typewriter in your home to use for school was a big deal and I was one of the lucky kids who had one. In typing class I was usually the first student to finish my speed-writing assignment – the teacher made us jump up out of our seat when we were done with the paragraph. It was the only race that I ever won (not being the athletic type), and to this day I would much rather type than hand-write anything at all.

So, when one of my fellow law students told me she was handwriting her essays on the California First Year Law School Exam (“Baby Bar”), I was totally shocked and somewhat perplexed that she would even consider this.

For me, it would be a disaster to have to write out my essays by hand without the ability to copy, cut and paste or delete at the touch of my key strokes and mouse, not to mention the effortless speed with which I can put those words onto paper. When we got to the exam center, there was naturally a big crowd for laptop users and a very small group of hand-writers that were delegated to another room. Well, she passed despite her handwriting, so I guess it worked for her!

Over the years, CA State Bar statistics show that laptop users have become the norm and hand-writers are becoming obsolete. During the Feb. 2013 bar exam, 79% of applicants used laptops while in July 2013, a whopping 90% used laptops. July is also the busier exam: for example, 10,259 applicants sat for it last July while in February there were only 5,641 applicants. When I took the California Bar Exam I didn’t see one student without a laptop in hand during my daily walk from the hotel to the test center, although I did talk to a hand-writer while waiting outside. He told me that he writes faster than he types. An out of state attorney who recently hand-wrote the California Bar Exam told me that her typing is so poor it would have been a disaster if she had to use a laptop! I guess these are good reasons not to type!

What If I Have a Computer Crash?

Despite the warnings to make sure you practice handwriting an essay just in case your computer crashes, does anyone really expect that to happen? We have all heard the horror stories of the student whose laptop suddenly malfunctioned, or the time when the power bar didn’t work and the exam proctor said “too bad.” Yes, they warn you to be prepared, but it’s human nature to think it won’t happen to you. I admit, I never practiced handwriting an essay, although if I had to do it, I could manage, but the results would not be pretty!

Luckily my sessions of essays and performance tests were free of computer malfunctions. I came to the exam juggling a bunch of equipment in my arms: laptop, USB keyboard and mouse (because my laptop keyboard is awful to type on and I hate track pads), mouse pad (yes it is allowed) and my little square analog clock measuring less than 4 x 4 inches. I felt comfortable and at ease using the same equipment I had been practicing writing essays on for the months before the actual exam.

As you get closer to the bar exam time frame, if you are a laptop writer you will need to download ExamSoft, the software that blocks off all internet connections and access to your hard-drive data. All of the instructions will be emailed to you in advance, and once you install the program, it’s well worth spending some time with it to practice writing so you can see how it works.

Check out some tips here on how to make ExamSoft work better for you. I particularly liked using the timer feature which I found to be even better than my little clock because it was right there on my screen. At the start of each essay I would set the timer to 15 minutes for my outline and then 45 minutes for writing the essay and I watched that timer continuously. I also set it for the Performance Test exam: 75 minutes to read and outline, 105 minutes to write. The other feature I used was to check my word count at the end of each essay which you can find in the “Stats” section of ExamSoft.

Brush Up On Your Typing Skills Well Before Exam Time

I do admire those bar-takers who confidently take on the task of writing for 3 hours by hand, but I still believe that lap-toppers have the advantage. Most law students have grown up with computers and even older students are generally comfortable with a keyboard. If you don’t type fast, or if you never mastered “10 finger typing,” you might want to consider investing in a typing course or at least check out some free online resources to see if it’s something you can handle doing in time for the bar exam. To find out how fast you type, try this neat typing test.  I did it and I clocked in at 74 wpm with 9 mistakes. Then I did it again a bit more carefully (you get a new test each time) and I got 70 wpm with only 1 mistake. Kind of fun!

Mastering the art of typing fast and accurately takes a fair amount of practice. Hopefully you learned it in school like I did, but if not, don’t sweat it. Lots of hand-writers do pass the exam, just as my friend did on the Baby Bar. However, if you have at least a year before the big exam and you still type like a snail, give touch typing a try. You might surprise yourself by how quickly you can pick it up!